“Okinawa is where Japanese cars come to die.” Those were the exact words our sponsor used when he was giving us the lay of the land on our drive from the airport to base on the night we arrived. “They are going to run you between $2,500 -$5000, but if you spend $5,000 we will definitely make fun of you behind your back.”

One of our first priorities upon arriving in Okinawa was to purchase cars. We were still staying at the TLF (temporary living facility) so we were on base and close enough to walk to and from the initial briefings, but there is something to be said for the freedom of going to the grocery store without needing to ask for a ride. After about 36 hours, Dane needed wheels more than Dane needed anything.

Luckily, the “Lemon Lot” (aka the Auto Resale Lot if you refer to the map) is within walking distance of the TLF. I doubt this is a coincidence. On our first full day in Okinawa we scoured the lot, taking in all of the “creative” shapes and colors of the Japanese vehicles. For a culture that doesn’t value individualism, these cars would not seem to communicate that.  On our second visit to the lot, we were ready to buy a car. We found a cute little Mini Cooper, listed slightly under the tease-worthy price point, and called the number in the window (with our new Japanese cell phones).

The owner met us at the lot later that afternoon, we drove it around the block a couple of times, and made him an offer. Much like house hunting in Okinawa, car buying moves fast on the island. In order to officially transfer the title, the three of us went to the on-base legal office, where we provided them copies of our SOFA (Status of Forces Agreement) drivers licenses, a copy of our orders, and our military IDs. It really was just about that simple. We wrote the guy a check, he took a picture of it on the spot to deposit into his account, gave us the keys, and we drove home.

Freedom at last. So we went grocery shopping. (It’s a theme in our lives for celebrations of any kind!)

With one car down, Dane felt he could really take his time picking out the perfect vehicle for himself… And his heart was set on the most hideous (but practical) car he could think of: a Nissan Cube. There’s a sentence I NEVER thought I would say about my Michigan-bred, truck-driving husband. But there you have it. When in Japan, I suppose.

He spent the next couple of days visiting the Lemon Lot, checking Okinawa Bookoo (which is the Craigslist of the Far East), and searching the surrounding car dealerships. We’d already bought a vehicle from an individual, so to get the full Okinawan-car-buying experience,  we thought why not try a dealership?

Like so many other things,  car dealerships in Okinawa are a bit different than they are in the States. There’s no chance of getting swarmed by a flock of overly helpful salespeople the moment you step onto the lot. In fact, I wish you luck finding an employee at all. The cars fill small parking lots where they are all left unlocked, parked mere feet from one another. You just kind of open the doors and hope you can squeeze behind the wheel. 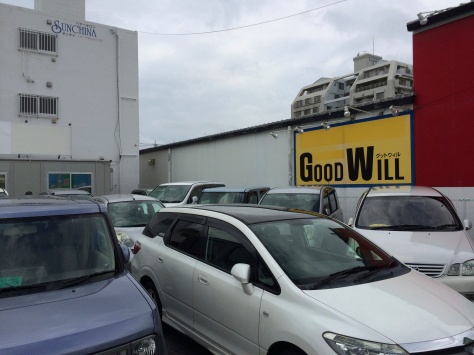 Another difference, is that they all have a price in the window, but none of them have the year or the mileage listed. You have to specifically ask if you want detailed information like this while making a decision. After walking around the lot for a while, and sitting in several smoke-stained Cubes, a little Japanese man finally came out of the building next door and approached us. “You want car?” He asked us without bothering to remove the cigarette from his mouth.

We walked around the lot, as Dane pointed at vehicles asking how much, what year, how many miles. I was mostly concerned that we find one that wasn’t going to leave me smelling like smoke every time he gave me a ride. We finally settled on a white Cube that was backed up against the wall. It smelled the freshest (though I wouldn’t go straight to “fresh”) and it was a 2007. Believe it or not, that was actually the newest car we had looked at. Most were 2002-2005’s. They wanted $4000. Dane offered $3000. They refused, and we left. A few hours later, they called us back and said they would take the $3000 if we paid in cash that day.

Another super fun experience is visiting an ATM a dozen times (because we don’t have a bank branch) to pull out $3000 in twenties. $3000 in hundreds looks normal. $3000 in twenties looks like you are about to get arrested for something. We thought it would be fun to throw it all up in the air or spread it on bed and roll around on it, but we were on a time crunch, so we postponed those fantasies for another time, and drove back to the dealership with what felt like drug money tucked into my purse. 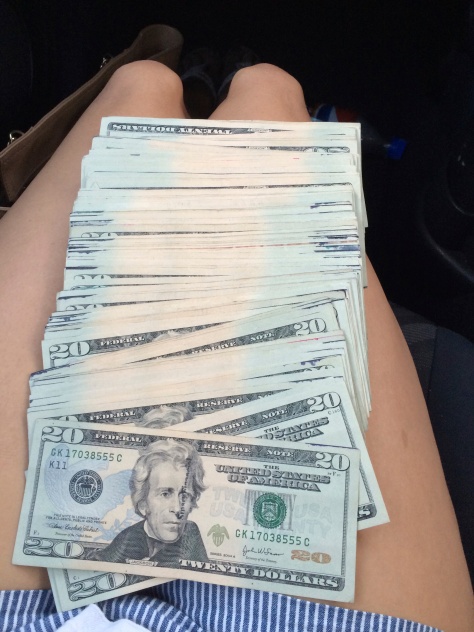 We sat across the table from three Japanese car dealers as they counted our cash, spoke quickly to one another in a language we couldn’t understand, and then started stamping papers furiously. Dane might have just bought a car. He might have just sold his wife. It was really hard to say. But in the end we signed some papers (in English) and they gave us the keys to our brand new Cube. We walked around the building to pick her up where we were greeted by seeing the back side of the vehicle for the first time. I groaned, Dane could hardly contain his glee. His “brand new” cube, had a tramp stamp. And not just any tramp stamp… but a diaper-clad baby wearing sunglasses and sucking a binkie.

I knew the answer to my question before I even asked, but I had to appeal to the side of him that used to hand wash his truck because he didn’t trust the people at the car wash to “do it right”.

“You are going to take that decal off the car when we get home, right?” I asked him. He just smiled and said, “I would have paid extra for that.”

I could see the wheels turning in his head the whole drive home, for how he might be able to make his tacky Japanese Cube just a little bit more colorful. Later that night I went on Amazon to find furry dice, a hula girl, and a steering wheel cover were already in our cart.

Hysterics. Agreed. I couldn’t have said it better, Japan. 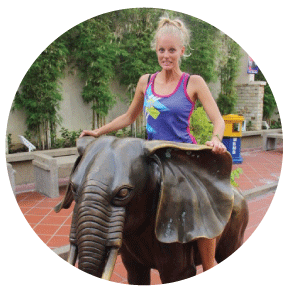 In 2013, I quit my day job to travel the world. From the day I landed in Bangkok, January 16, 2013, nothing has gone according to plan. It’s been nothing short of magic. Read more

A blog about life being pretty magical